Capricorn is the tenth sign of the Zodiac, ruled by Saturn.  Lunar eclipse occurs on Full Moon and Solar Eclipse occurs on New Moon. For individual horoscope, the four important sensitive points are Ascendant , Moon, Ascendant lord and Sun. (If you want to find these sensitive points in your birth chart and your free Vedic horoscope, please visit our member site http://members.decisioncare.org/ )In Vedic astrology, last three pada (of the four) or parts of Uttarashada , Shravana and first two padas of Dhanishta nakshatras are covered by this Zodiac sign. In Sidereal Astrology (that is in Vedic or Indian Astrology), Sun is in this sign from roughly January 14th to February 12th, while according to Western astrology corresponding to Tropical zodiac, sun covers this sign from December 22 to January 19th. To learn more visit Capricorn Astrology and Capricorn Compatibility Here by Vedic Astrology we analyze the effect of July eclipse on Capricorn Ascendant, Capricorn Moon Sign and Capricorn Sun Sign individuals.

July 2009 has two eclipses: a Penumbral Lunar Eclipse on 7th and a Total Solar Ec 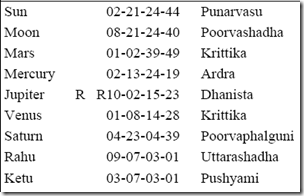 Eclipse has significant effect when eclipse point is in the rasi or nakshatra of natal planets or near sensitive points in the horoscope. An Eclipse in the same rashi as another planet will affect the fortune of the person indicated by that planet whereas in the same nakshatra will affect the

health of the individual indicated by that planet. The effects of an eclipse can be experienced around the time before or after the eclipse. If the luminary is placed before ascendant lord/sun/lord of the house, then the effects arise prior to the eclipse date.

The 5 Eclipse Astrological Influence Essentials are

3. The eclipse influences the matters related to the eclipse point house from the ascendant.

4. The planets in conjunction with or aspecting the eclipse point are eclipse significators .

5. Eclipse point degrees and Individual horoscope planetary longitudes, Rasi and Navamsa Charts should be analyzed together.

(For  predictions for other zodiac signs ,click here  eclipse-astrology-for-july-2009-horoscopes)

We emphasize, that every individual is unique and his destiny can only be judged accurately from his Vedic horoscope based on his unique birth date, time and place of birth. Any analysis (based on Ascendant sign, Moon sign or Sun sign) can at best give only a broad outline. We recommend everyone that they should get their individual forecast analyzed in a personalized manner based on their horoscope by Decisioncare. For details, visit our Affordable fees to get answers to any questions you think of!