The US government reported that the jobless rate (unemployment rate) reached a five year high in August at 6.1 percent. Employers laid off 84,000 jobs in the month of August. The high employment rate has become a major issue in this years presidential election as both Obama and McCain have pledged to reduce the unemployment rate. 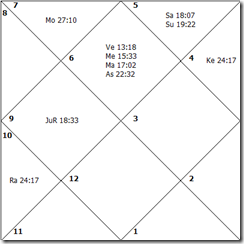 The employment report was published in Washington DC at approximately 8:30 AM on September 5th, 2008. The chart confirms the weakness in employment with presence of debilitated Venus in the lagna with 8th lord. However presence of lagna lord in lagna implies inherent strength. 11th lord moon in the 2nd house shows there is no major financial problems arising from unemployment.